We want to hear the good, the bad, and the ugly!
Post Reply
29 posts

I wrote a short report earlier, This isn't detailed report on IM course although I will repeat some necessary information about this course from last year report by 1triatatime.

3 years earlier...
I think it is important to mention that I went into my first triathlon race 3 years earlier in Guelph, it was sprint ( Swim 750m, Bike 19km, Run 5km ), I was helped by my wife, son and his girlfriend to carry all my equipment to the transition area. The equipment included bowl and 2L bottle of water for feet cleaning after the swim, shoehorn and portable stool to make changing the shoes easier. I was so afraid that I will forget to put on bike helmet that I have it on before I put on my bike shirt: 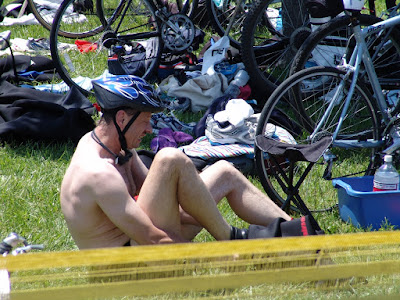 I did 20% of the swimming distance in front crawl and 80% breaststroke - exactly oppose of what I have planned. It didn't cross my mind then that one day I will attempt to do the Ironman race.

Pre-race
I felt of my bike four weeks before the race, and while the pain in the rib cage area was affecting my taper swim and run I was almost fully recovered on the race day, and that incident didn't have a lot of influence on my final result.

I wasn't afraid of hills, I had a week of climb training in Blue Mountains in June and I did test ride on the 10 km loop including the Heartbreak Hill on Thursday. This hill was steep but short, I made it easy to the top gaining confidence.

Water temperature was on the verge of wetsuit limit, I did my 1 km training swim on Thursday without wetsuit and was pleasantly surprised that it was so easy. I was ready for swim even without wetsuit despite the fact that bulk of my swim training was done with a pull buoy.

Bikes were checked the night before the race. Photos were made for security reasons; After the race picture taken was compared when athletes were leaving transition area. 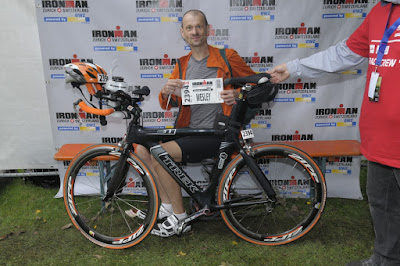 For the first time in my racing history I couldn't sleep the night before the race due to pre-race excitment, luckily I arrived in Switzerland on Wednesday and had 3 nights of good sleep before.

I was planning to execute my race inspired by article of Rich Strauss, Here is a relevant quote:
"The Ironman run course is littered with fit dudes walking and talking about what a great bike split they had. Don't join them."
I was the dude who has the great bike in Muskoka, but I was walking a lot on the run course.

My major goal for this race was to not walk on the run and to finish below 12 hours.


Swim
It was a mass start of 2000+ triathletes. The announcer asked to enter the water and wait for the start signal, but as soon as the first few rows entered the water the swim started; while still on the beach I saw first swimmers 500 meters ahead. 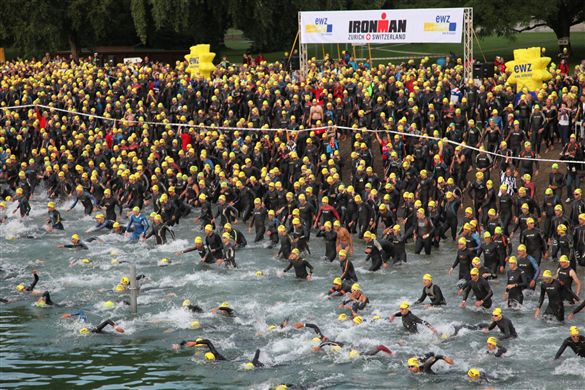 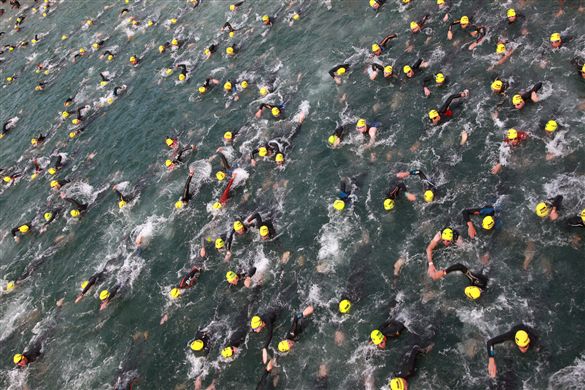 It was chaotic on the entry and for the first kilometer. I passed a lot of swimmers drafting from one swimmer, passing and drafting from another in front, multiple times for most of the first loop. On the second loop I had some moments when drafting was not available, but the course was still crowded.
I have finished swimming slightly ahead of planned time and I wasn't tired at all. Front crawl only this time.

Swim: 1:17:17
My transition time included change of shorts (last minute decision to use bike instead of tri shorts).
T1: 5:42

No name 8-9 km uphill starting at 30 km was difficult, but not steep, the Beast was tough, but it was much more difficult to climb on tired legs the hill to the village Fusch. I realized after that uphill that I am very poor descender. Almost everybody was passing me on this downhill. I was surprised and scared. I never had to slow on downhills in Ontario but my hands were in pain hard squeezing brakes on this downhill.
Most of the action with Tour de France like crowd happens on the Heartbreak Hill. While it is relatively short, it is steep and what was easy when I did it as a part of 10 km loop on Thursday before the race, it wasn't easy after 80 km of pedaling.
Start of the Heartbreak Hill: 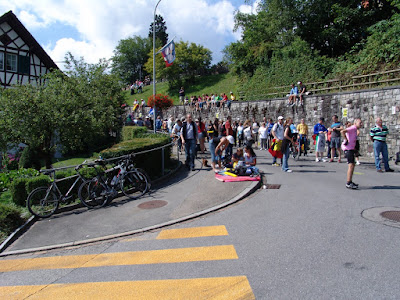 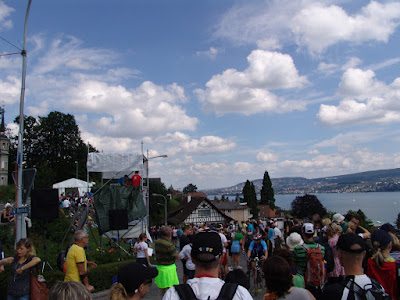 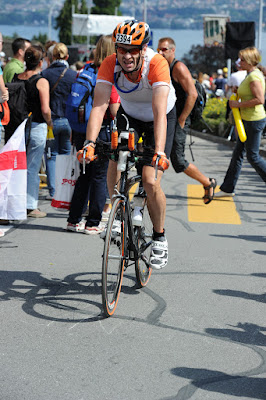 It wouldn't be very difficult course if it was just the one loop; I didn't push hard on uphills as I was trying to do relatively conservative bike split, but even without pushing near the end of the climb to the Fusch I questioned myself if I will be able to ride the Heartbreak Hill after it or will I walk it?
This time on the approach to the descend ambulance on signal passed me going obviously to help somebody who crashed. I was scared and slow on this hill even more than the first time.
I was able to ride the Heartbreak Hill - spirit of the surrounding crowd was priceless - it was even easier than on the first loop knowing that cycling is almost done. 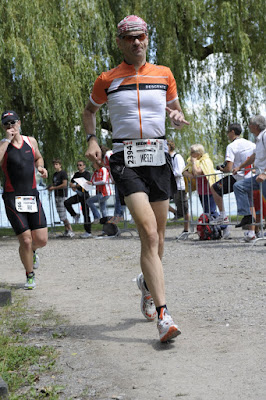 My planned pace for the run was 6:20 min/km which would be 4 hours 27 minutes marathon time. I felt great after the bike, and started way to fast 5:37, 5:41, 5:51. I didn't realize yet after 3 km that in the heat of the day it was to fast. At 5 km, waiting in line to the washroom and sweating like crazy I noticed that it is hot out there. I slowed my pace after that, to 6:20 and than after 11 km I slowed again - this time it wasn't conscious decision but rather the effect of exhaustion.
First loop (one wrist band): 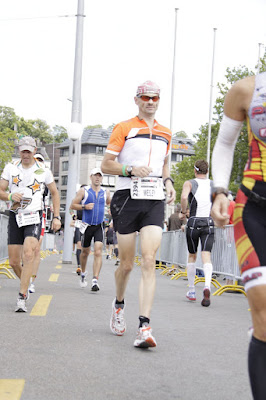 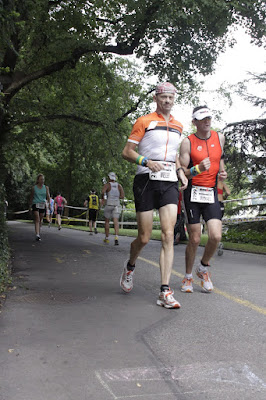 I was walking a lot during the 3rd loop. The sun was much lower at this point and clouds were moving in.
I returned to the rhythm of running on the 4th loop, but it wasn't fast, at times fast walkers were passing me

I put all I had to run this loop continuously, and I did with exception of aid stations. I even passed a few people in the final 2-3 km with the finish so close.
Run: 5:11.16 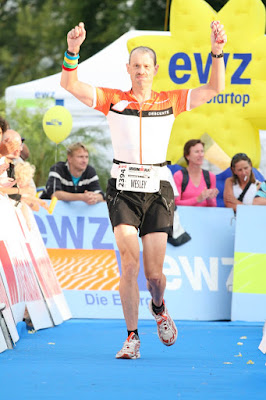 I was glad it was over but I was proud that I accomplished it. It is a huge jump from my first triathlon no so long ago. I suffered a little bit but overall I wasn't totally exhausted.

The Ironman race is tough no doubt about it, whats more important it takes time and discipline to prepare for one and that part is much more difficult.

As for my goals to not walk on the run and to finish under 12 hours... I will do another Ironman, not next year, maybe in 2-3 years. 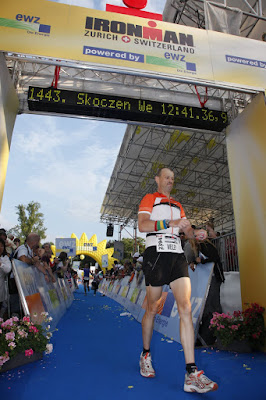 I recovered from this race very well, much better than from my previous marathons. On Monday I went to swim in the "pool" on the river, fighting current for 20 minutes and not moving at all: 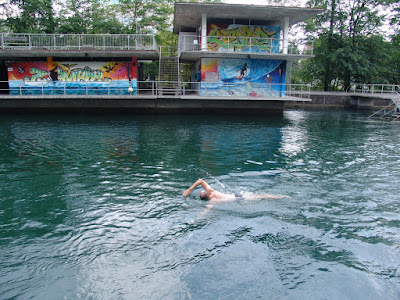 On Wednesday I went for a 6 hours mountain hike to see Aletsch glacier: 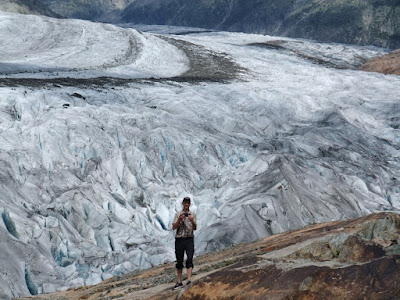 and than trips to Zermatt, Milano, Lousanne, Mountreaux... It was a great trip overall...I ate to much chocolate.. 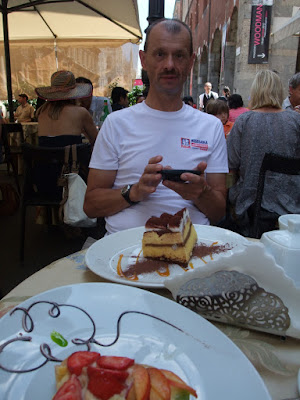 All included pictures and more

Loved the report! You sure have come a long way..a stool really?
Top

WOW that looks like a beautiful place to do a race! Great job Wesley. You have come so far, and that is a pretty great IM time!

What do you think you will do differently next time? Or is it maybe too early to ask that... haha. I am very jealous of all the chocolate, especially the Lindt visit!

"Don’t let negativity rent space in your brain for free. That is how you become a badass…by excavating her from inside you. You don’t have to become someone else. You need to identify the effing awesome parts of you that are your tools to work with, and maximize those." -Lauren Fleshman
Top

Wonderfully done!
I can't imagine how difficult those mountain climbs would be!!

Glad you're going to do it again - I'm sure you'll meet your goal next time!

Congratulations! You should be very proud! That cake looks yummy.

Wow that's a wonderful accomplishment! Yes be very proud, all those hours of training paid off. Inspirational!
next up:

You've come a long way in three years. Congrats on your accomplishment. Great photos, too!

And I love that quote about the fit guys walking on the run course talking about what great bike splits they had.

"Maybe I will be my own inspiration." - UltraMonk (Laura)
"Everywhere is walking distance if you have enough time." - Steven Wright
Top

Wow! Congrats on a great race

Colleen
Iron Sherpa Travel - Triathlete and Travel Agent!
Curious what I am up to? https://www.strava.com/athletes/5493183
Top

fantastic, congrats IRONMAN.
Being a flatlander, that bike profile terrifies me.

thanks for the report.

FishHog
In order to catch a fish, you have to drink like a fish.
Top

You were awesome, and more importantly had a good experience.

Worried about eating too much chocolate after all those months of training? Naww - you deserve it!

Very impressed with the methodical progression that got you to the IM, the disciplined race execution, and the joy you took in the whole process.
Top

Congrats IRONMAN! Looks like you had a great trip.

"Wherever you go, there you are."
Top

Great report and race. You Iron people amaze me.

Huge congratulations to you!

And ahhh...the wrist bands - i always wondered how they kept track of racers when it's a multiple loop course, esp on the run.

What a great report and pictures! Congratulations on such an amazing accomplishment. You have come a long way in 3 years! Well done.

Awesome! Congrats Wesley, you did and did it well. It looks like you had a tougher day weatherwise than I had, and you still delivered a great result. I'm doing Barcelona next year, wanna do it with me???

Users browsing this forum: No registered users and 4 guests