I had seemingly been training for this one for a long time - after overestimating my capabilities coming off injury in a November Marathon I declared a February do-over in which I was placed in a sauna.

So a Doo-Doo-over was on. It was evident from the consistency in printed date on the only two items handed out race morning that this race would be flawlessly staged: 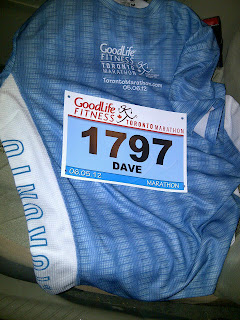 I found a spot at the start line - with the volunteer holding the sign for the 3:35:00 second/third corral split standing with the four other corral signholders (and no runners) on the course side of the start line, I took a spot in the disorganized mass of runners close to where the 3:15:00 and 3:40:00 pacers were standing next to each other. That's right, the corral signs were on the course rather than in the corrals - just like pictured below but with Marathon times, fiddling with cell phones and timing mats between the signholders and runners: 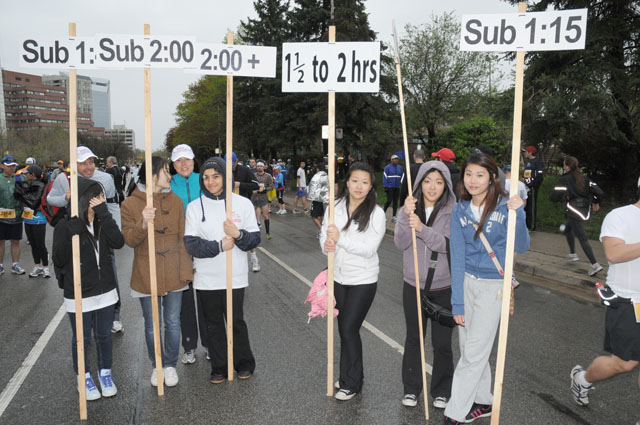 My goal for this one was 3:35:00 or 5:06/K. This was a group of only 2,000 on wide roads so the pack ironed itself out quickly and the 3:30:00 pacer went by in the first K as expected. This was a downhill first half, from Mel Lastman Square to the Distillery District, so I would be able to keep this pacer within view for a while.

14K to 20K from Casa Loma to Corktown on Davenport, Rosedale Valley and Bayview was a one long downhill. I had been increasingly on the 3:30:00 pacer group's heels on each flat and downhill for 45 minutes and at 18K I made the seemingly ridiculous decision that I had been considering for a while to pass this large group despite their aggressive target.

I was still feeling good and started to pass runners that had taken the first half too quickly. Ks 24 and 25 saw me blazing as if Mr. Goshdashditar was with me: As we passed Ontario Place at 28K to start a westbound leg to Humber Bay Park, the runners I was passing were in a worsening state of disrepair. This was surprising on a course with such an easy first half, though I had been dumping water over my head each aid station from 15K to keep cool as it was sunny throughout. I knew a PB was in the works, I just needed to keep it together.

I consciously slowed it down to my goal pace of 5:06/K and then to my PB pace of 5:11/K to make sure I wasn't the one out of gas mid-course later on.

The closing 7K eastbound on Lakeshore Drive had the only headwind of the day and the warmest temperatures. The last four Ks of this stretch saw me slow - the gel I ate at 32K was almost one too many for my stomach so no gel for energy at 37K and consecutive aid stations at 36.5K and 39K had run out of cups - so no Gatorade for energy and no water for hydration or for cooling. I drink just enough to stay ahead of the need so I started to have hydration issues to compound the stress a PB pace was having on my body. My sides felt like one big cramp the last 20 minutes of the race and I got it done without a lengthy slowdown but there was no sprint finish in me Sunday.

I was thrilled to find Lisa at the finish line as she had been saving a medal for me, even if I was going to be real slow.

I liked this race. Clearly it had some imperfections that come from being the Mayor's favourite whipping target and having dates and finishing locations yanked from it. But that's a big reason I considered this race for the first time. If the Boss Man keeps picking on it I'm sure to be back as long as he's in office.
Last edited by Double Bellybuster on Sun Apr 28, 2013 7:52 am, edited 4 times in total.
I am fortunate to have Running Free as a sponsor. I like to keep silly stats and maps of my Daily Neighbourhood Tours, Races and Marathons run in a Silly Yellow Shirt.
Top

I loved the last lines!!! Well done in holding it together and pulling off the PB
Vancouver 2012 Done!
Considering CIM 2012
Top

Congrats, on an awesome race and a spankin' new PB ...

Congrats. Did I read correctly that you finished a head of the 3:30 pacer...?
Top

Wow Dave! Congrats on the PB!

Although...I was feeling a bit of dread reading your report, seeing that your goal was 5:06 min/k and that you were posting some splits much faster than that in the first half. Glad that didn't come back to bit you!!
If it ain’t broke, run through it -- Strider
Top

cbaker1 wrote:Did I read correctly that you finished a head of the 3:30 pacer...?

This is correct. I was within earshot of him for a long time and he seemed to be very jovial and encouraging a big pace group of 20 or so. He just seemed to be pacing poorly, I don't know how he was going to hit sub-4:59/K when he was 5:05/K or so through 18K on the easy half and then was nowhere to be seem when I glanced back around the time I finished the first half in 1:45:35 or so.

jes wrote:Although...I was feeling a bit of dread reading your report, seeing that your goal was 5:06 min/k and that you were posting some splits much faster than that in the first half. Glad that didn't come back to bit you!!

I had lots of energy and had to hold back several times with the amount of downhills in the first half, glad I was only marginally too quick. You never know what the day will bring you.
Last edited by Double Bellybuster on Tue May 08, 2012 7:30 am, edited 1 time in total.
I am fortunate to have Running Free as a sponsor. I like to keep silly stats and maps of my Daily Neighbourhood Tours, Races and Marathons run in a Silly Yellow Shirt.
Top

Nice PB! congratulations on a strong race!
Sandra
"Appreciate what you got and chill when things seem overwhelming."
Top

Congrats on a race well run and a PB!

irun4me wrote:Once I got on to the link, I couldn't stop reading the rest of your RR's. Fantastic!

Aw shucks, thanks!
I am fortunate to have Running Free as a sponsor. I like to keep silly stats and maps of my Daily Neighbourhood Tours, Races and Marathons run in a Silly Yellow Shirt.
Top

Congratulations on a fantastic result!
Top

...and you ARE running a 50km trail race in 3 weeks? Congrats on it all coming together-all your learning's were used. So happy for you.
Help Fight Children's Cancer with Sears Canada and GoodGuysTri - 26 Team Mates, All Running 100km, 1 Goal.
If you have the time please read my participation page and consider a donation.
Top

Strider wrote:...and you ARE running a 50km trail race in 3 weeks? Congrats on it all coming together-all your learning's were used. So happy for you.

Thanks Bro. This is the plan. Once I get through the Sporting Life 10K this Sunday in one piece, I am signing up. I've only been putting off sign-up as there are no discounts for early registration. Besides if I don't run, I have to pace a crazy man through the dark that evening...

I am fortunate to have Running Free as a sponsor. I like to keep silly stats and maps of my Daily Neighbourhood Tours, Races and Marathons run in a Silly Yellow Shirt.
Top

It was good to see you! Too funny hearing my name being called out while I was picking up more medals!

Glad you got your revenge on Miami! Conditions were definitely not an issue. Some complained about it being too hot, but - well - after Boston, the complaints did just not compute for me.
It's not the size of the dog in the fight...it's the size of the fight in the dog! 11K Marker post - 2010 ATB.

Very nicely done--congratulations!
"We are made of dreams and bones."
--The Garden Song

Sweet new PB! Congrats!
"Maybe I will be my own inspiration." - UltraMonk (Laura)
"Everywhere is walking distance if you have enough time." - Steven Wright
Top

This... have not lived in Toronto since '95, but I hear about "Boss Man" from family all the time

Congrats on another stellar race, and for putting up a wicked report.

Congratulations on a well controlled run and a PB
2013

Get back to a regular exercise routine
Top

Congrats on the PB!
Top

Users browsing this forum: No registered users and 12 guests