I won't lie to you. I've wanted one of these buckles since 2014. I entered the race that year, but did not finish the 100 miles. I only got 45 miles; and my knee wouldn't work after that. So I dropped.

Here is the 2018 version with the shirt; which I now own. 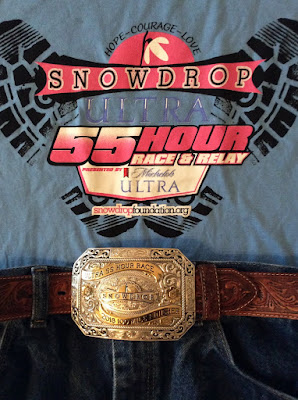 So the race lurked in my mind quietly for several years. In April this year, I did a 50k in a great time and I felt great after; I wondered if I could do 50 miles or even try a timed 100 agan.

I started to watch for entry to open. Opening was midnight on June 28. That night, I was laying awake in bed at 1:30 am thinking how I would enter in the morning. I decided to enter right then and maybe I could go to sleep. It was already 65% full. I filled by 8 am.

On December 24 I went to the Snowdrop course and ran for about an hour. While I was there, two of the race directors showed up. They explained everything to me and gave me a tour. On Monday December 25, I thought it would be ok if I just didn't go. I even drafted an e-mail to the RD saying to give my ticket to someone on the wait list; but I never sent it. I decided to go running first. For one hour, I was sure I would skip the race. But then I just sort of lost that energy. I didn't send the e-mail.

I went to packet pick but a box containing about 10 lbs of old race medals. Snowdrop Foundation puts new ribbons on these and hand them out to kids with cancer; "Bling for Bravery."

Day 1: I'm at the race site very early. I was awake most of the night worried about getting a parking spot in the A lot. The weather might rain but it is pretty warm. I claim a good spot along the course for my wagon and chair. Eventually, the race starts. I planned to run 3 minutes and walk 2 minutes until I got to 61 laps (42 miles). I did well with this until about 34 miles when I decided to walk the last 15 laps. The course was half concrete and this was taking a toll on my lower back and knees. So I shut down the running. I was on course moving forward about 11 hours and a little. Lots of pit stops to grab food, shift garmins, porta-potty, etc. It did rain for about 30 minutes so I got to use my new umbrella. I was very tired after the 30 min drive home.

I resolved to show up for day 2, but no expectations on performance. I ate a big bowl of vegetarian cuisine for dinner. I didn't sleep real great.

Day 2: I got to the course and started running at 5:17 am. I was surprised that my legs felt good. So I again did 3 minutes jog and 2 min walk. I slowed down my running speed to lessen the impact. I did real well, with too many pit stops. The weather was pretty warm, but a heavy mist. So I was getting wet and had to use a rain shell.

They had some new signs on the course. Here is my favorite: 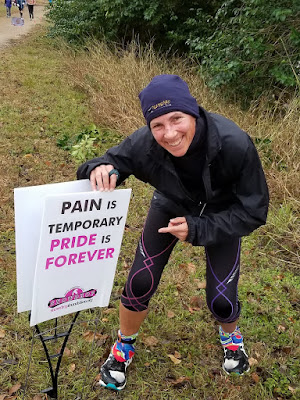 I must have been a cranky pants a good part of day 2. Some people started finishing. I got to see the things they do for each and every person who gets to 100 miles. All I thought was I don't want all that fuss. Just give me my buckle and let me go. Cranky Pants!!! Better I finish on day 3 when I won't be so cranky.

I got the second batch of 61 laps done. The shoes I used for day 2 weren't exactly right. These shoes had caused some problems with one of my toe nails. After I got home, I figured out what to do about that (and used a different pair of shoes for day 3).

I was now up to 84 miles. I knew that come hell or high water, I would finish those last 16 miles, even if I had to crawl.

Day 3: Again, I didn't sleep very much. After 84 miles, by body felt a little beat up. Nothing was broken, but I kept feeling little twinges of pain here or there. My hips weren't happy, so I couldn't lie comfortably. But I had the alarm set for 3 am; and when it went off, I was up and at 'em.

I started forward motion at 4:45. It was very cold. Many people were still on course. Many of these people were walking very slowly and maybe limping.

I on the other hand, was amazed at the recuperative power of laying in bed for a few hours. I was well enough to again do the 3 minutes jog and 2 minutes walk. I was doing really good. It was very cold and windy, but this didn't seem to bother me. I finished the final 16 miles (23 laps) in about 3:45.

I had to be patient. It was still going to take a few hours to finish 16 miles. Don't screw up now. But I was excited to see my lap count get closer and closer. And I was feeling better and better. I couldn't believe I was actually going to finish this thing. It had taken alot to get to this point.

At 143 laps, I could hear them mention my name. The RD asked me how many laps as I went by. I said 2 more. She said, "Next lap is your bell lap?" I said, "Yes." She wrote something on her clip board. I kept going but started to cry real tears. Even as I type this now, I'm crying. I was going to finish that race.

I am not a quitter!

They actually have a big hokey bell that you ring for your last lap. As I came through the race crew was again saying my name. I rang the bell. Then, I ran most of the last lap. The crew was watching for me as I came around. They hold a finishers tape for everyone. They announce on the loud speaker. The RD even said it was my first 100 miler (true), and that I almost quit earlier in the week. 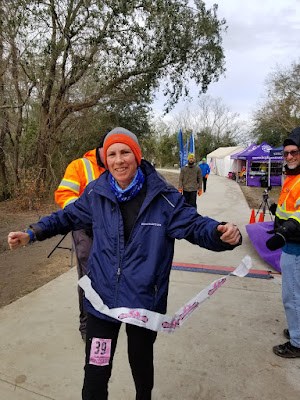 Here I am getting my buckle. 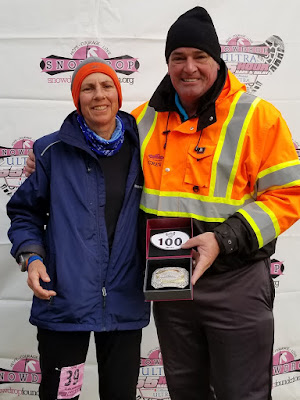 A word about me and timed ultras. Why did I go home? Well, for many races, when something goes wrong, my brain is too worn out to fix any problems. All I do is quit, usually with 50 miles. But, when I get home, I realize what I could have done. If I had a crew, that person's job is to fix my problems; but I don't. So this time, I just planned to go home, even though it was a 35 minute drive. Indeed, after day 2, I had some repairs to do on toes and at home, I had the resources.

Also, I know what part of my problem with 100 mile races is. After about 35 - 40 miles, I am not interested in more running. If it is a 50 mile race, I'll tough it out. But I fail to see the point of walking slowly for 65 miles; and quit instead.
Athlete....Maniac 973....Marathon Maniac 6645
Live the most amazing life you can live - La
marathon runners are awesomeness personified - Ian
Bucket list: http://www.tassietrailfest.com.au/
http://ultramonk.blogspot.com/
Top

Fantastic, Laura! I’d just gone to your journal to check as I knew you had a big week d, but didn’t realize just how big. Congratulations!
Life is short. Stop whining!!- Jwolf
Top

YOU’RE NOT A QUITTER!!!
Yay you. You did it. I’m so happy for you.
I wanna live like there's no tomorrow
Love, like I'm on borrowed time
It's good to be alive, yeah....Jason Gray

I really enjoyed reading this report! Loved the pictures, loved the commentary and reflections. Love the buckle!

And I think it's great that you donated your old medals to such a worthy cause.

Congratulations! Definitely not a quitter!
Top

This is so awesome, Laura! So happy for you. You did it.

It is definitely a lot more challenging for you to do this without a crew. The looped course makes the logistics easier than other ultras, but the psychological factor is so important. So many ultra reports I have read describe how the runner relies so much on their crew for psychological as well as physical support. To do it all yourself is quite the accomplishment.

)
Support me in my fundraising for the Boston Marathon, Boston Public Library team:
https://www.crowdrise.com/o/en/campaign ... iferwolf11
Top

Thanks for the congrats.

I've been thinking about this all day. This might be a highlight accomplishment of my life.
Athlete....Maniac 973....Marathon Maniac 6645
Live the most amazing life you can live - La
marathon runners are awesomeness personified - Ian
Bucket list: http://www.tassietrailfest.com.au/
http://ultramonk.blogspot.com/
Top
Post Reply
8 posts • Page 1 of 1

Users browsing this forum: No registered users and 10 guests