A comfortable place for anyone and everyone to talk about running

Not doing this one but have been eyeing it for a while. Can't wait to hear what you think about it. Good luck in your first marathon. Hopefully you can get a new pair of shoes ready beforehand.
Top

Not in the plans for this year but maybe next year. I have a special place for this half and it's a great course. Have fun!
Sonia

Dr. S wrote:Not in the plans for this year but maybe next year. I have a special place for this half and it's a great course. Have fun!

I love this race as well... have done the half 3 times and my first (well sort of) full. Awesome course!

Good luck and enjoy your first!
KEEP GOING, NEVER GIVE UP: Spencer D

I am running the Marathon in Detroit!
I am fortunate to have Running Free as a sponsor. I like to keep silly stats and maps of my Daily Neighbourhood Tours, Races and Marathons run in a Silly Yellow Shirt.
Top

I am wearing my Tech shirt!

It is so cool to run across the bridge and under the river!

Good Luck to those running it!
http://connect.garmin.com/profile/trixiee14

For those that have run this before, have you carried your own water etc.? The website suggests that you don't because of the bridge/tunnel crossing.
2015 - the year of the 100 miler
Top

hezzy wrote:For those that have run this before, have you carried your own water etc.? The website suggests that you don't because of the bridge/tunnel crossing.

I have run with a fuel belt (half) as well as hand held (marathon). I have never had any issues with the border crossings carrying my own water.

They do encourage you to ensure your bib is visible and on the front though. One year the border patrol was screaming at a woman (with incredibly loud headphones) to "show her bib". And they actually did stop her as she wasn't listening to them.
KEEP GOING, NEVER GIVE UP: Spencer D

Thanks Mini-Tee. Good seeing you (briefly) at the Toad

Just be aware of the downside of breaking this rule. Unlike the risk of a possibly disinterested volunteer nagging you when one breaks a no-headphone rule, breaking of this rule could result in being stopped dead in a race by a customs official, paid to be alert and under oath to enforce, potentially twice, while you pour out the liquid you are carrying.

Good luck in the race.
I am fortunate to have Running Free as a sponsor. I like to keep silly stats and maps of my Daily Neighbourhood Tours, Races and Marathons run in a Silly Yellow Shirt.
Top

It is a "suggestion" that you not carry fluids. Not a rule, so I would say that you will be OK Hezzy...

I have done this race 4 or 5 times and have never ever seen anyone have their water taken away.
KEEP GOING, NEVER GIVE UP: Spencer D

From Race Rules on the Web:

Bridge and Tunnel policy is to prohibit liquids. Runners are discouraged from carrying items on these portions of the course as they may be asked to either inspect or drop them. However, at the end of the day it is up to the runner’s discretion.
I am fortunate to have Running Free as a sponsor. I like to keep silly stats and maps of my Daily Neighbourhood Tours, Races and Marathons run in a Silly Yellow Shirt.
Top

I too have run before with water and had no problems. I am also prepared to give them my entire belt or camelbak whatever I decide to wear if they want it. All they asked was that my bib number be visible at both crossings.

Good luck to all this morning!
I am fortunate to have Running Free as a sponsor. I like to keep silly stats and maps of my Daily Neighbourhood Tours, Races and Marathons run in a Silly Yellow Shirt.
Top

Thinking of you all! The weather is perfect!
http://connect.garmin.com/profile/trixiee14

I hope that everyone had a great race. Looking forward to some results.
On the books for 2017:
50th Birthday!!
Boston Marathon- April 17th what a day- DREAM COME TRUE

chunkymonkeymelonhed wrote:I hope that everyone had a great race. Looking forward to some results.

This was a great event.

My result was mediocre...but my errors are not a mystery so I'll be better next time.

I recommend this event to anyone considering it. The bridge and tunnel border crossings and fans in a second country (Canada) are very interesting additions to your typical urban marathon.
I am fortunate to have Running Free as a sponsor. I like to keep silly stats and maps of my Daily Neighbourhood Tours, Races and Marathons run in a Silly Yellow Shirt.
Top

This one was on the long-term to-do list but came onto this year's schedule when an opportunity arose for football tickets in Indiana the day prior. I had been training for an October 14 Ontario marathon so a bump by a week was doable.

Fall Marathons have been my weakest. I enter events less trained than in other seasons as I suck in the summer heat, often without much quality to my post-work afternoon training runs. I also enter Fall Marathons less tested and less aware of my capabilities as races of greater than 10K are rare in late July and August. I've had both mechanical failure and failure from pushing a pace beyond my training in recent Fall Marathons.

So after a Summer where I elected to not miss any Saturday parties to ensure quality Sunday runs, a poor Fall history and a plan to sit in a cold stadium all day Saturday and then drive and grab a bit of sleep before the race, I was set.

I've traditionally done a decent job at gauging my fitness level entering Marathons and sticking to a reasonable pace throughout, which has led to a lot of passed runners in the latter half of races. I knew, based on my training, that the 3:35:00, or 8:12 per mile, needed to PB was an aggressive target. My PB of 3:35:24 had come with better training on a downhill course, this course was an out-and-back (net flat) course. There was nothing in my summer training that suggested I could significantly best this pace.

I had no problem sticking to my 8:12/Mile plan early. The recap here may be a bit confusing - my watch matched the physical Statute/Imperial measurements of the course, but, like NYC, the timing mats were surprisingly based on Metric measurements, every 5K.

Exuberant fans on the short trip through Canada added to the race adrenaline, cool weather and an exciting early course.

I was quick through down the Ambassador Bridge but then kept sub-8:00 as the fans loved the Canada jersey and let me know it.

I was running with the lack of patience of a first-time marathoner. This was a shared first 13 miles with the 14,000-runner Half Marathon field. There were physically thousands of runners ahead of me but the majority were running a shorter race and only hundreds of competitors were in fact ahead. I caught and passed the 3:35:00 Pace Group during Mile 7 - seemingly foolish but my experience has been that my own pacing is more reliable...if I was not overestimating my ability on the day. (The only time I followed a pacer historically he bonked and in my last Marathon I beat the 3:30:00 pacer to the finish line with my 3:35:24.

I consciously dialed back the pace - I knew I was out too quick and was only now thinking about avoiding any late crash.

I could see what was going on - I was equal to my pace from my Spring PB but it had a ridiculously downhill first half.

Cumulative Split Through Half:

Still strong here - for the first time since the opening two miles, I was down to planned pace.

Long section here, apparently I did not run across the timing mat at 30K.

The 17th mile was the first through a residential neighbourhood and was the first where I was having to really concentrate to stay on (or close to) planned pace. It seemed to be more stiffness than a lack of energy impairing me but a lack of glycogen (energy stores) can present itself in many ways.

The 3:35:00 Pace Group caught me just before the 19 Mile Marker and the leader yelled to the group "We're seven seconds to the good." I realized at that point this was one of the good pacers, who was conscious of running an evenly-paced race and not just getting to the finish line at the right time.

Through the 20th and 21st Mile, I struggled to stay with this group, then close enough that I could catch the group on downhills, then I was struggling to keep the group within range and then within eyesight.

The chase of the pace group. A runner is going to slow by a minute a mile or so once out of gas and burning fat rather than glycogen but if you get to where your early quick pace and late forced pace involve too much time at or above your lactate threshold, you may end your race while out the course...and this was happening.

While I was eating more and more gels trying to get some carbs (glycogen) into me to offset the higher-than-planned calories used early, a combination of stiffness and lack of energy slowed me to a jog:

And then gastrointestinal distress joined the stiffness and energy issues.

I was now passing for position back-and-forth with a young lady who couldn't stop vomiting since well before I first caught her in mile 22. Yes, I was flying.

I got a bit of a retrieve in the 25th Mile when I was handed two dixie cups of beer by a spectator. Got bless the fans!

Apparently I caught a Half Marathoner in my lone home stretch photos. Poor girl - no one deserved to have half the speed I did: 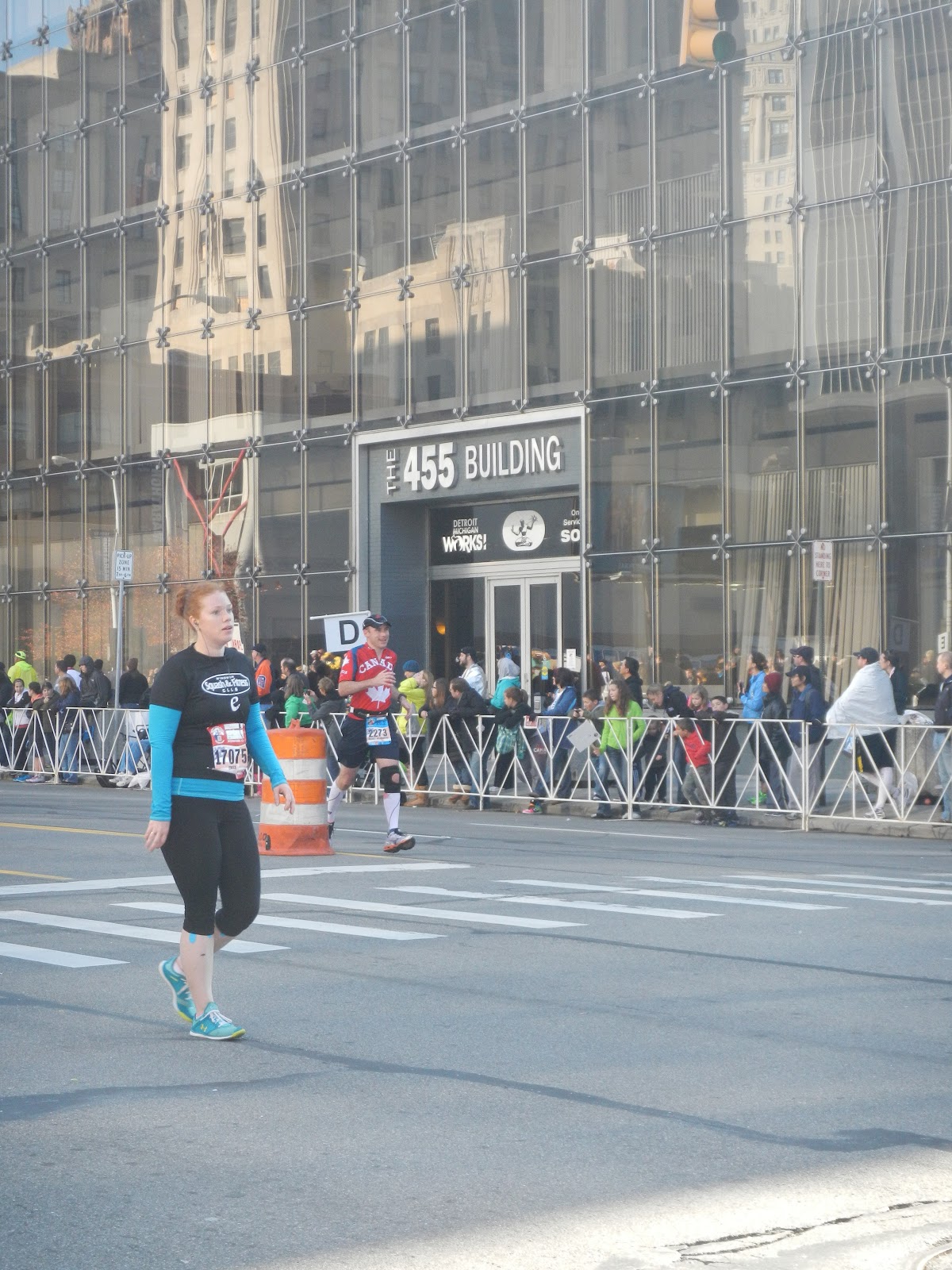 Final Result - my placing was fine but surely I blew at least ten minutes running too aggressively:

The rule of thumb that one minute spent running too quickly early in a race will cost your four minutes late was surely true today. My Half Marathon Splits of 1:45:32/2:01:08 were ridiculous. With an opening Half of 1:47:30, 8.5 minutes slower than a raced Half Marathon for me, and cool weather, I would have had a much better day.

A great event, always one of the top medals going: 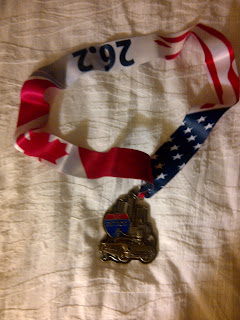 And I could still identify where home was: 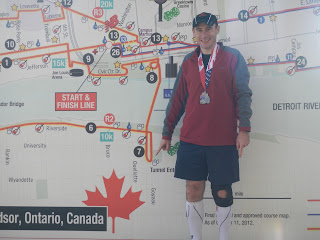 I am to the point now where I am finishing in the top 15-20% of distance race fields. I need a lot to come together to do better, including solid training leading up to the race. And thoughts of trying to PB in Fall Marathons after crappy Summer training will be shelved accordingly.

Bring on the winter and spring.
I am fortunate to have Running Free as a sponsor. I like to keep silly stats and maps of my Daily Neighbourhood Tours, Races and Marathons run in a Silly Yellow Shirt.
Top
Post Reply
19 posts • Page 1 of 1

Users browsing this forum: No registered users and 28 guests